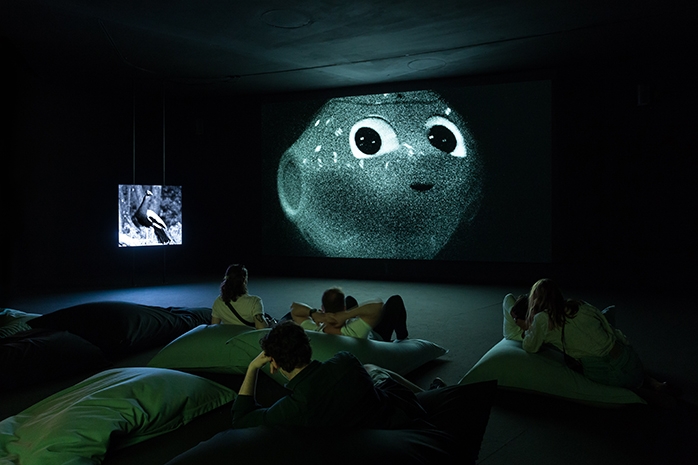 M . A . G . N . E . T is the title of the film by Basim Magdy, commissioned by MAAT. The film is a historiographic metafiction that short-circuits past, present and future in a fictional narrative full of ambiguity and mystery. The plot describes how different individuals and communities face the news of an increase in the planet’s gravity — one of the four fundamental forces of nature – describing in a poetic, yet realistic way, a series of unexpected events and situations that take place in different locations and contexts.

Using several effects and cinematic techniques, Basim Magdy (b. 1977) leads us into a series of bleak and seemingly abandoned places in a truly immersive and unsettling sensory experience. At MAAT, the film is the centrepiece of a project that unfolds in several formats that interacted with the Video Room’s architecture.

The film was shot over a period of almost two years in different locations in Europe, including a volcanic crater on the Greek island of Nisyros, a robotics laboratory in Manchester, the Côa Valley Archaeological Park, and the Dino Park in Lourinhã, which taken out of their historical and geographical contexts are presented as a purely fictional (and disruptive) background that serves the narrative.

M . A . G . N . E . T is a reflection on the current situation that projects us into a future and hypothetical scenario. An oracular metaphor that warns us of an announced and impending catastrophe or the natural cycle of the earth's.