This two-day programme invites international speakers and sound performers whose works are focused on the body under normative design and the colonial paradigm. From design practice to social realm: how “form” in certain socio-spatial conditions has been shaped and acts as an agency.
The theme of the first panel discussion is about how the body is controlled through design in architectural history over the years and how contemporary practices respond to this. The second panel focuses on the bodies of cross-decolonial potentialities in various cities and geographies.
The aim of these public events is to expand the thinking of EXIST/RESIST entangled with various practices and places, and as well performing decolonial sound in collaboration with the Palestinian Radio AlHara.

The panel focuses on the discussion of queering architecture and body under normative design and paradigm. How the body is controlled through design in architectural history over the years and how contemporary practice responds to it.

The panel discussion brings together thinkers, curators, and practitioners to talk about cross-decolonial potentialities in various cities and geographies. The political pressure, surveillance of the body, and possibilities of resistance to the decolonial body through spatial practices and the role of the design, of the material, will be discussed.

Didier Fiúza Faustino and Yousef Anastas attempt a one-hour improvised performance of sound layering, coupled with sonic experiments in adventurous fields that are yet to be apprehended. Both architects are researching and surveying sound experiences in the global south as a resource for spatial assemblies and alternative cultural knowledge. The music event will be a collaboration with Radio Alhara, a Palestinian online radio station that has broadcast from Bethlehem since its launch in March 2020 during the Covid lockdown. The station launched the radio show Sonic Liberation Front as a response to the violent ethnic cleansing in Sheikh Jarrah in East Jerusalem.

Didier Fiúza Faustino is an artist-architect and the director of Mésarchitecture studio, based between Lisbon and Paris. His work, taking shape of installations, sculptures, scenography, films, editorial projects, temporary architecture, or built-work, transcends borders of society, design, art, and architecture by exploring the relationship between body and space. The first institutional exhibition surveying almost thirty years of his practice, curated by Pelin Tan, is now on view at maat – Museum of Art, Architecture and Technology (Lisbon), and coincides with the release of Architecture for Disquiet Bodies (Lars Müller Publishers), which provides an overview of more than twenty-five years of his work. Faustino was awarded the Pierre Cardin Prize (Architecture) of the Academy of Fine Arts/Institut de France in 2018 and the Architecture Silver Medal of the Dejean Prize 2010 by the French Academy of Architecture, and is part of Le French Design 100. He is represented by Michel Rein Paris/Brussels and Galeria Filomena Soares, in Lisbon.

Ana Naomi de Sousa is an independent documentary filmmaker and writer-journalist who works on resistance, spatial politics, popular culture, and history. She directed Angola: Birth of a Movement, The Architecture of Violence, Hacking Madrid, and Guerrilla Architect as well as the Forensic Architecture's interactive web documentary Saydnaya, in collaboration with Amnesty International. From Portugal, she has written about racism, police violence, immigration and labour struggles, housing, citizenship, and spatial practices of resistance. Since 2018 she has collaborated with the collective Decolonizing Architecture (DAAR) on projects in Sweden (Living Room, 2018), and in Ethiopia, Eritrea, and Sicily (Afterlives of fascist colonial architecture, 2019 and 2021). She is currently working on her first feature-length documentary and translating the seminal works of the Brazilian architectural theorist Sergio Ferro from Portuguese into English as part of the Translating Ferro, Transforming Knowledges project.

Carla M. Cardoso is a designer, teacher and cultural manager. Graduated in Product Design at Architecture Faculty of the Lisbon University she is director of Iminente where she coordinates several projects. She is Professor in the degrees of Industrial Design, Programming and Cultural Production and in the masters of Product Design and Cultural Management at ESAD.CR. Between 2002 and 2012 she was coordinator of production and programme development at experimentadesign. She was production director of the Lisbon Architecture Triennale (2012) and the Est Art Fair (2014), executive coordinator of doclisboa'13 (2013), Projecto Sociedade (SNBA, 2013/2014), European Creative Hubs Forum (British Council, 2015), Choose Architecture programme (OASRS) and the exhibition Architecture in Competition (CCB, 2016), Paradisaea (Lux-Frágil, 2018), the exhibitions Agriculture and Architecture (2019) and The Sea is Our Land (2020) at the South Garage of CCB. In 2022 she was co-curator with Alexandre Farto and António Brito Guterres of the exhibition Interferences – Emerging Urban Cultures at maat. Since 2007 she is co-director of Associação Futuro where she co-directed several programmes and applications.

Elias and Yousef Anastas are partners at AAU ANASTAS architects and co-founders of Local Industries, Radio AlHara and The Wonder Cabinet. The studio focuses on tying links between crafts and architecture at scales that range from furniture design to territorial explorations. The studio has been advocating for the contemporary use of structural stone in architecture in Palestine and elsewhere, and has been particularly interested in the politics of stone used for low carbon footprint structures, more resilient cities, and more responsible quarries’ exploitation. Radio AlHara is a community-based online radio that weaves unconventional nets of solidarities through sonic experiences. Linking a priori different hyper-contextual conditions to create a new strengthened global critical discourse has been at the intersection of all their practices. Most recently they have launched the Wonder Cabinet, a space-based initiative in Bethlehem for cultural productions that gathers a community of artisans and artists in technical and artistic realms in the aim of producing a culture of global provincialism.

Francisco Díaz is an architect and Master in Architecture, UC, Chile; MSc CCCP, Columbia University, USA; Ph.D. (c) Polytechnic of Turin, Italy. He’s an Assistant Professor at the School of Architecture of the UC, Chile. He was editor-in-chief of Ediciones ARQ between 2015 and 2022, editing and publishing more than 100 books and 24 issues of ARQ magazine. His editorial work was awarded at the 2016 Pan-American Biennial of Quito, and at the 2022 Ibero-American Biennial held in Mexico City. His writings have been published in Argentina, Canada, Ecuador, England, Italy, Mexico, the Netherlands, Peru, Spain, the United States, and Uruguay. He has curated exhibitions for Palacio La Moneda and Centro GAM, the two biggest cultural centres in Chile. His 2019 book Contemporary Pathologies: Essays of Architecture after the Crisis of 2008 won the 2021 Spanish Biennial of Architecture and Urbanism prize. His next book, titled Soils, will be published in March 2023.

Françoise Vergès is a writer, independent curator and decolonial antiracist activist. She learned from her anticolonial, communist and feminist parents and Reunion Island’s people (her country) that decolonisation is a long process, and that political antiracism is antipatriarchal, anti-capitalist, and anti-imperialist. Her forthcoming book, Programme de désordre absolu. Décoloniser le musée, will be released in February 2023.

Mark Wigley is Professor of Architecture and Dean Emeritus at Columbia University. He is a historian, theorist, and critic who explores the intersection of architecture, art, philosophy, culture, and technology. His books include Konrad Wachsmann’s Television: Post-Architectural Transmissions (Sternberg Press, 2020), Passing Through Architecture: The 10 Years of Gordon Matta-Clark (Power Station of Art: 2019); Cutting Matta-Clark: The Anarchitecture Investigation (Lars Müller, 2018); Are We Human? Notes on an Archaeology of Design (written with Beatriz Colomina; Lars Müller, 2016); Buckminster Fuller Inc.: Architecture in the Age of Radio (Lars Müller, 2015); Constant’s New Babylon: The Hyper-Architecture of Desire (010 Publishers, 1998); White Walls, Designer Dresses: The Fashioning of Modern Architecture (MIT Press, 1995); and Derrida’s Haunt: The Architecture of Deconstruction (MIT Press, 1993). He has curated exhibitions at the Museum of Modern Art, the Drawing Center, Columbia University, Witte de With Center for Contemporary Art, Het Nieuwe Instituut, and the Canadian Centre for Architecture. Most recently he curated Passing Through Architecture: The 10 Years of Gordon Matta-Clark at the Power Station of Art, Shanghai (2019–2020).

Piny is a performer, choreographer, researcher and teacher of mixed practices. She believes in a free artistic creation that is socially and politically engaged. Born in Lisbon of Angolan heritage, Piny graduated in Architecture and did a postgraduation in Scenography, both at the Architecture University in Lisbon. After she completed the degree in Contemporary Dance in Lisbon. In 1999, she began studying dances from the Middle East and North Africa and their contemporary fusions, and since 2006 she has also been dedicated to Hip Hop and Clubbing culture, through dance (Breakdance, House, Waacking, Vogue), Djing and graffiti. In 2006, she founded the crew ButterflieSoulFlow and in 2012, the collective Orchidaceae, presenting their work and teaching around the world. She develops her artistic work as a freelance performer, working with different artists and develops her own work, as the solo HIP. A pussy point of view, Sacred Geometry – a Meditative State and .G RITO. 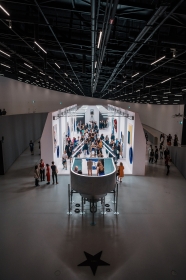 The Work of Didier Fiúza Faustino
A conversation with Pelin Tan, curator of the exhibition EXIST/RESIST
Become a member
Get the latest news from maat in your inbox Subscribe Newsletter