Lawrence Weiner — Placed on Either Side of the Light, 1999

Placed on Either Side of the Light by the North American artist Lawrence Weiner in 1999 was permanently installed on the riverside pavement fronting maat after more than 15 years of nomadic displacements. Different versions have been exhibited in galleries in various countries, including Germany, Switzerland and Serbia, assuming different shapes according to the exhibition space.

When the EDP Foundation acquired the work, the form it should take was obvious to Weiner. “Lisbon is renowned for its pavements made of Portuguese stone. We saw an excellent place on the pavement, and we knew that it had to be there”, says the artist. The letters of the sentence that gives title to the work, in English and Portuguese, were produced from cast iron and a team of expert paviors incorporated them into the pavement in the form of two intersecting rainbows, between the stairs of the building designed by AL_A (Amanda Levete Architects) and the Tagus River.

Lawrence Weiner (b. 1942), one of the most relevant names of the 1960s Conceptual Art movement, defines himself as a sculptor and his work focuses mainly on language — phrases printed on paper, engraved, stamped or glued onto walls, windows, buildings and even the ground.

“One great thing about being a sculptor who works with language is that there’s no need to explain any of your work,” says Weiner. “The piece literally speaks for itself.” 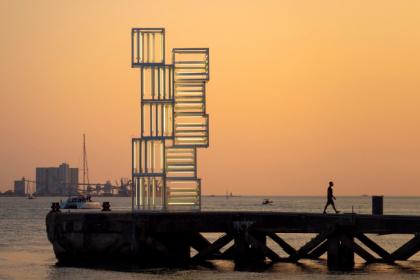 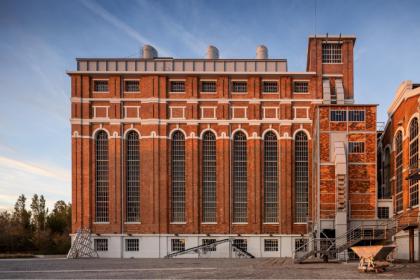