All metrical possibilities can be considered “swing”. And “swing” does not relate only to rhythms but also to the nature of each sound. I believe “swing” to be melodic in essence; the six phases of the composition Swing Ratio, composed here for a quartet, seek to evidence the four fundamental states of the matter in a sort of narrative.
What increasingly interests me in music is to relate, unify and – why not? – simplify as far as I can...
Sei Miguel

Sei Miguel is fully aware of the history of jazz when he plays his (pocket) trumpet and is open – as a director and arranger – to unlimited sources of sound possibilities. Over four decades of continuous and rigorous work, Sei Miguel has perfected his own musical system allowing him to elevate detailed pieces to a remarkable state of precision.

Highly unique and executed with rare intensity, this trumpeter’s jazz has a myriad of singular qualities: the manner in which (in his own words) “time and space, silence and timbre are exclusively used in composition”, the thematic materials, the themes within its conceptualism, often the idea of orchestration itself, and also the greater importance conveyed to the performers, who are converted into “exponents of a micro-tradition”.

Sei Miguel was born in Paris in 1961. He lived in Brazil and in France until settling in Portugal in the 1980s. His albums, from Breaker (1987, Ama Romanta) to the decisive Showtime in 1996, among others, and Tone Gardens (2006, Creativa Sources), are hard to find today. It should be therefore noted that the record label Clean Feed is focused on gradually releasing his entire body of work: Esfíngico – Suite for a Jazz Combo (2010), Salvation Modes (2014), and (Five) Stories Untold (2016). 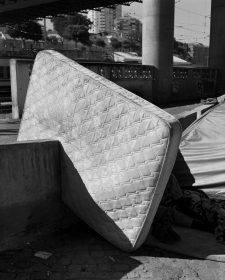