Derivas invisibles [Invisible drifts] proposes a reflection on the substantial amount of plastic waste present in our marine ecosystems nowadays, increasingly contaminated especially by nets and elements used in the fishing industry. According to a 2018 research, around 85% of the waste found in some parts of the oceans around the globe are nets or fishing gear lost or deliberately abandoned. In the Great Pacific Garbage Patch, the presence of fishing nets is estimated to be 46% out of the total 79 thousand tons of plastic. These abandoned nets, also named ghost fishing gear, not only pollute the seabed but also tangle and asphyxiate fishes, sharks, dolphins, sea turtles, octopuses, whales, seals, and even birds.

Despite the belief that single-use plastics like plastic bottles, bags, or straws have a huge presence as marine debris, fishing gear waste is indeed the biggest pollutant in our oceans. Inspired by the traditional fish traps, we propose an urban scale art installation to reflect on this reality. A fishing device, a waste itself that arrived all the way from the ocean, a recovered net potentially dangerous as a ghost fishing gear, that has already entangled and trapped other marine plastic debris on its drifting here.

Reinforcing Basurama’s commitment to sustainability and circularity, the net now used in this sculpture was originally employed in Dominique Gonzalez-Foerster's Pynchon Park, a new installation that opened maat in 2016, specially conceived for the museum's Oval Gallery.

Basurama is a collective dedicated to research, cultural, and environmental creation and production whose practice revolves around the reflection on trash, waste, and reuse in all its formats and possible meanings. It was born in 2001 in the Madrid School of Architecture (ETSAM) and, since then, it has evolved and acquired new shapes. Their aim is to study those phenomena inherent to the massive production of real and virtual trash in the consumer society, providing different points of view on the subject that might generate new thoughts and attitudes. They find gaps in these processes of production and consumption that not only raise questions about the way the resources are managed, but also about the way reality is thought, worked and perceived. Far from trying to offer a single manifest to be used as a manual, Basurama has compiled a series of multiform opinions and projects – not necessarily resembling one another – exploring different areas related to trash.

With the support of the Embassy of Spain in Portugal. 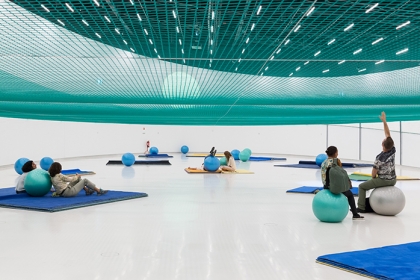